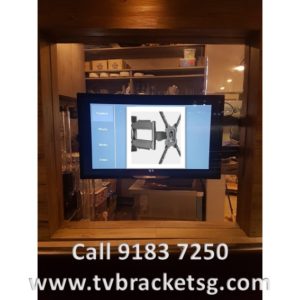 Over a span of many decades, television has become a world-changing media. It has brought worldwide events right to the living rooms of the people. We have seen TVs go through many changes. Back in the old days, owning more than one television set was considered a status symbol.

TVs are not the only thing that has been moving forward. Today, we have dozens of inventions that have greatly improved our TV watching experience. Since TVs started getting thinner, LCD wall mounts were invented for the best viewing pleasure.

It was the first industry standard for mounting hole patterns and mounting plates that ensured easy mounting of arms and monitors from different manufacturers based on the weight and size of the screens.

These standards set the precedent for medium and small-sized screens that was available at that time. But, since that time, there has been an explosion and development of popularity for larger LCD and plasma screens that were not covered by the guidelines published in 1997.

Most of the manufacturers were following the original VESA mount guidelines for plasma screens. But, alternatively, for monitors that were not following this guideline, interface brackets were available for purchase separately.

But, this caused a lot of expense and inconvenience to customers. Finding or developing interface brackets that allowed LCDs of various weights and size from numerous manufacturers proved to be a loathsome task.

Hence, with the release of an updated mount standard, manufacturers with panel sizes more than 90” were provided with new standards to follow so that screens from different manufacturers can be made within the given standards without many problems and can be matched by different mounting arm manufacturers.

Earlier, wall mounts were made very bulky in nature and were designed mainly for commercial applications, like retail outlets, bars, airports, and hospitals. It did not matter much if the TV set was hung even ten inches from the wall.

Soon, when people started realising how useful it is to hang a TV set like a painting, industrial designers stepped in to design mounts that were lighter, thinner, and smaller. We are one such reputable and trustworthy firm that offers professional TV bracket installation services in Singapore. Plus, we also provide various high quality TV brackets and TV mounts to customers.

Today, most of these TV bracket in Singapore have lower profiles and can hold the TV set a few inches away from the wall. Some can even gap the space down to less than an inch, making it perfect for ultra-thin TV sets. Many mounts now also have features that will allow you to tilt, articulate, or rotate your TV set without any effort.