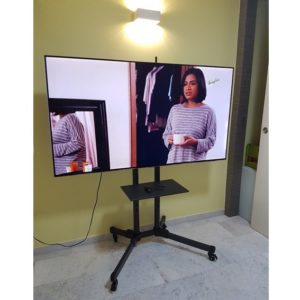 The mobile television stand is a device made in order to hold your television in place in order to provide a suitable angle for viewing from a lot of positions while in your house. Mounted on wheels, the stand allows you to move your television set from one point to another inside the house. They also hold various gadgets in place, such as your decoder and other such devices in place. They offer ergonomic relief in their ability to be moved and their adjustability.

Some mobile television stands come with a rotating shelf that allows you to hold important gadgets, such as your decoder. You could also leave your remote on the shelf or even position your gaming console for easier access.

TV Mobile Stand are very stable hence reducing the chances of tipping them over and destroying your television set together with the gadgets on the stand. Their design allows binding of cables to them hence reducing tripping hazards.