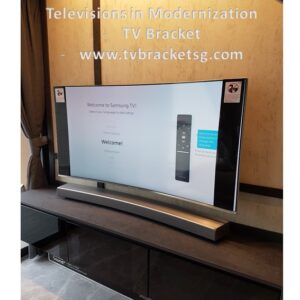 The traditional televisions that we used to see in the old days are gone, modern televisions are now being mounted in the walls. Modernization brings every appliance in the household to change and what people need to do is to adapt those changes. TV stands and racks are now taken over by the innovation of TV brackets, so the televisions are easy to install in different places such as schools, rooms, and in any corner of the house.

Changes in TV installations are now needed, wall mountings requires a tool they call brackets. Brackets have the ability to hold such expensive televisions need for a better attraction. They are considered as the solution in designing advanced model of some TV set-ups.

Getting a TV Bracket

Before looking a TV bracket, you must need some basic information about them. There are different types of TV brackets that vary from their size, shapes and quality. It starts with a flat screen TV bracket, desktop monitor brackets, LCD and LED TV brackets, plasma TV brackets and others. It always depend on the type of the TV set on what type of TV bracket it requires for it to be mounted. As an example, you have to take note that there are products that differs according to the type of TV brand it supported before buying it.

Having a good step before buying a bracket is a great milestone. First of all you need to a list of items you need for this type of work. You have to keep in mind that using a bracket will put your TV in a wall or ceiling will be fixed firmly that will definitely hold the load of your TV set. Then you have to consider looking for the tools to be used in the installation process, it may need some level, screwdriver, studs, drill bits, bolts and washers and wrenches.

Many brackets are now available in every market or in hardware that are equipped with different unique features. There are many brackets that possess high durability features because of the type of steel they are constructed. There are various types of brackets with different hole patterns on the back to hold the TV in place. The following are some of the commonly used brackets available in the market or hardware nowadays.

One of the strongest designs of TV brackets, simple as they maintain no screen movement. Considered to be the easiest to install with any extreme walls without any special needs compared to other TV brackets. Fixed brackets also do not require large amount of time in its installation, low cost so it’s a budget friendly bracket as the lowest-priced bracket in the industry.

The upgraded version of the fixed bracket. These type of bracket will give you at least 5 to 15 degrees vertical adjustments used to balance your TV design, also to change the vertical angle of the installed TV. It gives a better view for the TV allowing a better viewing experience for everybody.

Full motion brackets are the priciest one. It offers the widest viewing angle rather than any type of bracket. Usually the manufacturers give an extra extending arm for its additional feature for support. As expected full motion brackets on the upper class against the other types but still it needs a higher cost and much technical to install because of the added features of extra arms. However, even its pricy it will give a better outcome for the viewers as it can turn and extend in its mounting place.

Last option of them all, it only allows the TV to be placed on the table top. Just like the older versions, it does not require additional efforts in installing and hassle while mounting your TV. This stand is not a child friendly because it can get outbalanced when the table moves. Its only applicable in rooms for adults and far from children below five years old.

Brackets are tool designed to mount the television in the wall other than placing it in a table top. This feature gives more stability to the television when placed in the wall. This method also saves the amount of space taken by the television in a room together with its designs. Larger televisions require larger brackets for its safety and in order for the bracket to hold the TV.

The best brackets are those with tilting features, as they can be moved to your desired positions and have a better way of viewing. Comfortable viewing is one of the benefits of having a bracket instead of a stand, once the TV is mounted it will follow the desired adjustments and alignment from the installer. Not all brackets are easy to fit to a TV, some may require dimensions for its holes just make sure that you use a bracket with the same model of the TV.

Brackets are invented due to the problems in setting up a room for its interior designs. Some televisions are vulnerable when they are placed in a table top together with the furniture in a house. The best possible way to answer the problem is the usage of TV brackets, to mount the television on the wall to save space for the furniture’s.

TV sets covers a lot of space, televisions are one of the most common appliance found in every single household. In the recent survey, almost every one household has one television set in their houses. Televisions provide an entertainment for the family, as it supports news reports, movies, drama and many advertisements.

Good quality brackets can come from hardware stores, markets, malls and even online shop. Just be sure to the model it supports and the brand of the television that it will support. There are a wide variety of brackets available on the market, from the simplest form like the flat bracket up to the most complicated and costly brackets with extra swing arms.

Is It Better To Use TV Brackets?

Many opinions about using a TV brackets are being heard, some people are satisfied in using a bracket but some are disappointed. We all know that there are some advantages and disadvantage in using this kind of tools, but they are not made to be perfect and needs to be develop for them to be useful.

One advantage of using bracket is that it gives more space for furniture’s because the TV is being mounted with the wall, but the disadvantage of it is somehow when the bolts are loosen or the person installed the bracket is loose, there is a higher risk that the TV might fall. Also mounting televisions in the wall requires an additional manpower because you need to hire a skilled person to install the bracket. Poor installation will also result in a poor quality of work, so there are higher chances that the TV might fall.

During earthquakes, wall mounted televisions tend to move, as they move they tend to lose their placements and alignments causing them to fall in the floor and result to a permanent damage on the TV. Bigger televisions also have a higher number of weights, so a poor quality of bracket may tend to break and damage the TV.