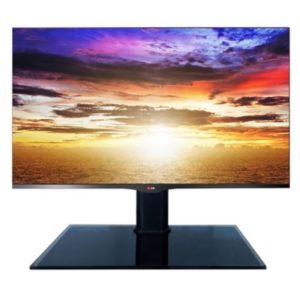 The table top mount stand is a television stand that comes with various features that make television watching way more comfortable. It is not only stable; it allows the user to adjust it so as to suit the needs of that particular user for a particular situation.

The height of the table top mount stand is adjustable so that you are able to view the television from numerous angles. This helps reduce strain especially on lower back and on the neck whenever you are trying to adjust to get a better view. The adjustable height also means that you are able to view the television whilst on the floor, on your couch, or even when standing. This is useful especially for those who game using their television screens. By adjusting the height, you are able to provide a comfortable viewing angle for both players (that is if you are on two player mode.)

The fact that the stand can be placed on a table top means that it makes setting up your television space simpler. Raising the television set also gives you enough space for your gaming console (for those who game), or your decoder.

Finally, universal tv table top mount stands in Singapore come with an aesthetic finish, meaning that they will add some sort of coolness to the room. With special features that help hold the cables in place, the risk of you tripping or getting electric shock from stray cables is highly reduced.