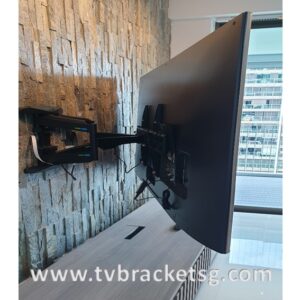 When you’re selecting a TV bracket for your LCD or Plasma TV, it is a very critical job. Since you have a specific TV model, so you need to select that TV Bracket that perfectly matches your television requirements as well as the place you want to fit.

If you chose any other TV bracket that is made for some other brand or model that will not suit your LCD or Plasma TV, it doesn’t fit and secure your TV. While selecting a mounting bracket that is suitable for your television and desired presentation position.

Whereas when you’re purchasing a TV bracket, you keep in mind that, one is that this bracket is gripped your valuable LCD or Plasma TV. Hence, didn’t buy a cheap mount TV bracket is not a good idea. It is better, for you, than go for a reliable brand and merchant with the supreme agreement for your valuable electronic gadgets.

There are so many varieties of TV brackets in Singapore available for every model of television and the place of display. These verities are suitable according to the place and model.

If you’re selecting one of the above types you will want to discover each of these numerous models to choose which type is suited for your living situation. For example, if you’re living in a flat you undoubtedly require a television floor position with an escalating TV bracket instead of a wall-mounted TV bracket.

Mostly when you’re fitting a TV into your room, the owner of the flat didn’t permit you to drill holes in the wall, which is mandatory for appropriate mounting of flat panel televisions on the wall.

Swivel mounts brackets are the next style of brackets you have available. In this type of wall mount bracket, you have extra flexibility about your TV. For example, if you have the TV set onto the wall and you want to change the position towards your dining hall for dinner and after that change it back into the first position for after the meal.

Another type is tilting mounts brackets are accurately how they are sound. In these brackets, there is an additional segment to the TV bracket, which permits you to tilt the television for a good view. You can go for a rectangular mount bracket or choose the universal mount brackets which work for different types of television sizes all in one TV bracket.

You just have to choose how much you want your TV bracket to tilt according to the requirements. A tilting mount bracket is an outstanding option if you want to mount your television higher than that of your furniture, such as over a fireside mantel. So, you can tilt the television down to make it cooler to watch.

The cantilever mount brackets are designed that can hold the television beyond from the wall than that of the swivel mount bracket. You can position it in more than one position and encompass it out from the wall by employing both arms in a similar location.

It can swivel or tilt though you need it to, all without attainment out of your present chair. With these brackets, there is a remote control that helps you by attaining different positions according to your requirements and situations. The above-mentioned motorized mount brackets have come in all sizes you could need for your television needs.

These TV brackets are in sizes ranging from least size to 65-inch brackets for the largest made flat TV screen. One has the choice in what style of mount bracket you select and it is frequently built on how you want the television to be situated.