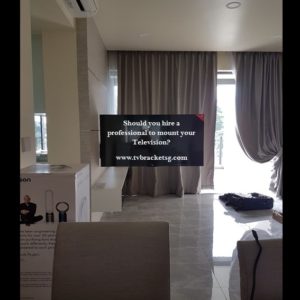 Given that flat screen is on the rise as the most preferred option for most people as far as home entertainment is concerned, it is imperative that if you are to purchase one of these televisions, to make sure that they will be safe. And what a better way than to use a television mount. Over the recent years, mounts have come to be accepted universally.  Compared to the traditional television stands, people prefer the mounts to the stands as they are much safer and stable. We covered the differences between the stands and the television mounts and in case you missed that blog, click this link

Tv mounts are preferred because they help save space in your apartment and they give you flexibility such that you can place the television anywhere you want in the room. And given the fact that some of the wall mounts can swivel, this allows them to be adjustable giving you even more flexibility. There are a lot of advantages that push people towards the television mounts and you might be tempted to mount the tv bracket in Singapore all by yourself. You can do it but if you have no prior experience, I would advise against it. In this blog, I will outline some of the reasons why you need a professional to do this work for you, especially if you are a newbie.

You could damage the television

One of the problems associated with the DIY method is that you could end up damaging your television badly. If you are not careful, you risk causing both the internal and external damage to your television that could necessitate an expensive repair. In addition to that, you could also end up damaging the structural design of your house particularly the walls that has metal studs or even that is made of plaster. If you end up damaging both, then it defeats the purpose of installing the mount in the first place.

Professionals know where and how to install the television, that is their field of expertise. They will choose the right area for the right placement. Professional installation service companies will help you determine the best place to mount the television depending on very many factors that at the time you might not be aware of. Like the best place that will determine the optimal viewing for the whole house throughout the enter room. That is something that you might be considering.

Installing is a professional service

Installing tv bracket in Singapore is a professional service and it is not meant to be done by one man. If you are not someone used to handy works on a regular basis, chances are you are going to do a messy work and that could end up doing more damage than good. Professionals in the installation services have been trained for this purpose and it is something that they have been doing for quite some time, so they have the experience. Installing the television on a wall requires you to lift the television and precisely place it on the mount.

Installing the television on the wall require that you use some power tools. If you are not used to these tools, there is a high chance of you getting it wrong and probably mounting the television on the wrong spot. Wall mounting requires the use of a few different tools including a power drill, socket wrench, stud finder, level, measuring tap and a padded blanket, all of which you will use in the process. Even if you have the right tools for the job, if you are not sure about how to use them, you could end damaging the wall or the television. Mounting is not that easy; it requires a certain degree of accuracy.

If you have never mounted a television before, relying on the internet could a risky way to go. However, there are those who by nature are very technical and would grasp the process quite easily. We have tons of educational materials that will help you in the installation process. You could also talk to one of our professionals for advice.