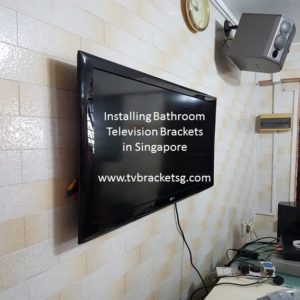 Modernizing your bathroom seems like the best choice ever and if you’ve been thinking about purchasing a television for your bathroom, you’ll need to first consider your safety, and the safety of your bracket. We have almost a decade of experience in the installation of Tv Brackets in Singapore. So today we are going to discuss about the safety of television bracket installation in the bathroom.

Unlike the kitchen which is the center of family life, or even the living room which is a den of the for family and guests, a bathroom is a private retreat and a hideout from all the world around, temporarily at least. One of the reasons why people love having a television in the bathroom, is the soothing background noise as one prepares to go for bed, or even, as you prepare for the day, you’d like to get a jump on the day’s headlines as you prepare in the morning. However, mounting a television bracket in bathroom is not as simple as it may look. And its not the same as installing a bracket in the living room.

How safe are bracket tv brackets in Singapore?

Most people have safety concerns for the Televisions mounted on the living walls and surely, having a television mounted on the bathroom raises a lot of safety concerns. We understand why most families have an issue installing waterproof television in the bathroom for the first time, but our services meet the market grade requirements of safety standards.

One thing is certain that installing a television bracket in the bathroom is not easy and therefore, this explains the safety concerns. Therefore, you need to find a company that has a good reputation and professional services. Tv Brackets in Singapore is well versed in all matters to do with television mounting. So, depending on who installs your brackets, I’d say television mounting in bathroom is a very safe option.

Shop for a waterproof television

In bath, especially one that is used on a daily basis, shopping for the normal television set is not a good option. In fact, I would totally ignore installing the normal television set for any bathroom. It won’t stand the humidity. A waterproof television is designed specifically for the bathroom. It withstands the humidity and moisture buildup in the bathroom. When purchasing your television, make sure to select the one that’s rated for bathroom or outdoor use, which means that it can withstand wet environments. You should also check for more specialized versions for example televisions that have built in fog resistance.

Different people will experience television as an amenity and a center for luxury and comfort, while others will view it as an invasion to the daily life. If you want to install a television in the bathroom, you need to choose an optimal location where you will install it. it is not supposed to be too high, otherwise you won’t see a thing, and, it is not supposed to be too low. After you’ve decided where you want the television, if its too high, choose a wall mount that will tilt to a position of optimal view. Hop on to Tv Brackets in Singapore to view our wide collection of brackets.

Make sure to tilt the television for comfortable viewing

If you want to enjoy your television while taking a bath, the last thing you want is to have to crane your neck to see the television. When deciding the optimal view, you either mount the television low, or go with a style that will pivot up and down to allow proper positioning of the television where you are most comfortable to watch it.

You will notice that television in the bathroom do not naturally fit and therefore, you should consider hiding it to avoid drawing too much attention. You could conceal it in a bathroom door in a recessed niche. You could also fit the bract in a movable piece of a framed art for it to appear as natural as possible.

Having a bathroom television is one of the best choices and a number of technology companies now offer television screens embedded within bathrooms mirrors. These make the television completely disappear as soon as you press the button.