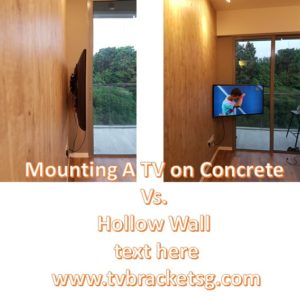 Mounting a television is not a hard thing, it is not complicated as most DIY professionals make it look and sound. As a matter of fact, it is the simplest activities and I enjoy walking people through it. However, what most people don’t know is that the type of wall that you are considering to mount the tv plays an integral part of the process. The most common wall types are the concrete and wooden walls. Therefore, before you even begin the process of mounting the television, it is important to know which wall you are working on.

Unlike the wooden walls, mounting the tv bracket in Singapore on a block of cement gives you the confidence that your television is safe and stable. The cement anchor provides good stability for the television. To mount the television on the concrete wall, you have to follow these steps preciously;

It is important to also note that most houses are typically prefabricated and they do not have electrical running through them. Therefore, as you are designing the ideal place for the tv, make sure to make a provision of the wires.

When doing bracket mounting on the concrete wall, I always advice people to stay away from the edges both vertically and horizontally.

While drilling, be very careful and watch out for any sudden voids or plastic texture. You will also find that there are cases where you are dealing with a double brick and in this case, you might have an airgap, be very careful of that too.

When fastening the wall mount, you want to make sure that it is firmly fitted on the wall.

The process of mounting the tv bracket in Singapore on a concrete wall is fairly simple. And actually, most people prefer the concrete walls to wooden walls.

Is it possible to mount on hollow wall or plasterboard? That’s the question most people ask. It is a logical question and we have covered all the details on separate blogs. What you will find is that currently builders are taking advantage of two hallow wall systems;

That shouldn’t worry you, in most cases both the wooden and metal stud profiles are placed at a center to center position on a recommended distance of 600 mm although in some cases it may be 450 mm. the key thing is to find the stud and once you have found the studs you will just follow the process as in the concrete walls with the only variation being that you are working on studs. So how do you find the studs?

In case you are working with the wooden profiles; you can check by knocking on the walls until you find a place that sounds less hollow. Make that spot, then measure approximately 450 to 600 mm. in case of a metal stud profile, using a pipe finder allows you to detect the metal profiles.

As long as you make sure that you have fastened the brackets firmly on the wall, it really doesn’t matter what type of a wall you are mounting the television. The only consideration you have to ensure is that you are working with the right bracket. Can it hold the weight of the television? Also, for all the walls, make sure to avoid the weak spots.