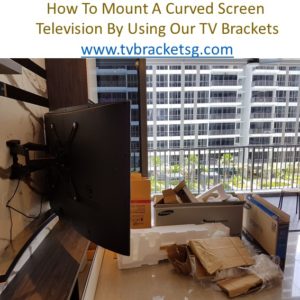 By now, I know you are quite used to the curved screen televisions and as a matter of fact, they are not a sensation they were when they were first introduced. Most of the major brands are forced to play down their curved screen models, but that doesn’t change the fact that so many people purchased these ‘immersive experience’ screen and would like to know how to mount them on a wall. Given that most people are realizing the beauty and the safety advantage of the mounts, traditional placing methods such as the stands are wearing out. Mounting has become the most favorable option when it comes to placing the television.

Caution: though the information that we are giving here is fairly easy to read and understand, I would suggest that if you are not familiar with the process, or you are not sure about yourself with the mounting process, let the professional handle the mounting for you. Contact us today for the best television brackets in Singapore. We will also be happy to provide you with technical assistance should you need it.

The first step towards mounting a curved television in your house is to gather the tools that you will need for this process. Some of the most important tools are;

On your concrete wall, hold the wall mount onto the wall and make marks where you will install the screws. Basically, the mount will have holes that you mark their exact point as it coincides with the wall. On the concrete wall, where you have marked the marks, drill six holes, or the number of marks you have made. At least, the holes should be 10 mm in diameter and a hole depth of 60 mm. after making the holes, fasten the mount onto the wall using the screws and washers on the drilled spots.

Assuming that your wall is made of wood, the steps are much similar but with a little modification. The first step is finding the studs on the wall, you don’t want to mount on a dry wall. After identifying the studs, mark the spots, it should be four marks on the wall. This is the spot where you will mount the bracket.

With the marks made on the wall, drill four holes on the marked spots and unlike the concrete wall, the holes for this case should be with a 5 mm diameter and a depth of 60 mm. after drilling the holes is to secure the TV wall mount to the wall using screws and washer taken from the package provided.

After securing the wall mount onto the wall, leaving it like that doesn’t bring an appealing look, to avoid that, you need to place a plastic cover over the mount to keep your wall in a neat state, covering all the screws on the wall plate and help the mount blend as part of the wall.

Attaching the mount plates on TV

Hang the television on the wall plate

The best way to do is sliding the mounting rails on the mount plate and then move on the clip the two arms into the gear to secure the television on the mount. After mounting the television, you might find that the television might be at an unfavorable angle. This mostly happens when you have tightened the screw nuts, you need to allow the full functioning of your tilting function by loosening the screw nuts on the head of the tv plate.

Following these steps diligently will ensure that your curved television sits perfectly onto the wall. If you are unsure about this process or you need professional help, contact us today.