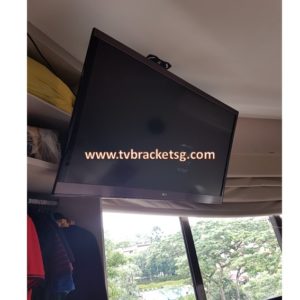 In our last article, we talked about what a ceiling mount is and some amazing aspects of the ceiling mounts. Today, we are going to discuss more on these mounts and specifically, how to mount them. If you read our last article, you must be wondering, how to install these ceiling Tv Brackets in Singapore because, on the surface, it looks really complicated.

Remember we said that the ceiling television mounts come in handy where the space is quite limited. They are mostly used in restaurants and bars, but if you’re they still one of the effective ways to ultimately maximize the benefits of owning a flat screen television panel to economize on the space available. Contrary to what you may be thinking, mounting the brackets on to the ceiling isn’t that hard than mounting the bracket on to a wall. I will outline the procedure and if you follow it, you’ll see that’s it a very simple process.

Gather up your supplies

Of course, you will need the mount itself. These mounts are sold out on different outlets but if you are looking for genuine products, then Tv Brackets in Singapore is the place to shop for your bracket. We have a wide variety of these brackets. Now that you have the bracket, let’s try installing the bracket, but first, some of the things you will need include;

Am assuming that you have all these tools with you. The next thing I want you to do is to inspect the mounting slots on the back of your television. If you have been following our blog for long you must have noticed that each brand of television comes with a different placement for the mounting slots. They may either be in the square form or a rectangle form.

After identifying the four recessed holes with threading for mounting screws, the next step is to attach the mounting brackets to the back of the television. These are frequently long metal pieces with screw holes. Position the bracket such that the screw holes align with the mounting slots on the back.  Fasten this alignment.

At times a person will get so detached from the process and this might result in damages so after fastening the arrangement, the next thing you need to do is to make sure that the television mounting brackets are firmly attached and that there are no loose wiggling or gaps.

Working on the ceiling

Now that you have the set up with the television ready, it’s time to work on the ceiling. With a ladder, grab the stud finder and with it pass it back and forth to where you want to mount the bracket, when you find it, mark it with a pencil. It is very dangerous to mount your ceiling mount on any other place other than on the stud. It could free fall at any moment.

With a drill, make a hole on the ceiling for the television wires but this is really not necessary, but if you want to make your television wiring tidy, then make a provision for that.

With a pencil, you need to make an outline of where the ceiling mount is to be placed. After you have located the place where you are going to place the mount, hold it against that place and make an outline. Line up the wall mounting holes with the studs you had marked earlier, when the mount is in place, gently outline it.

Attaching the television to the mount