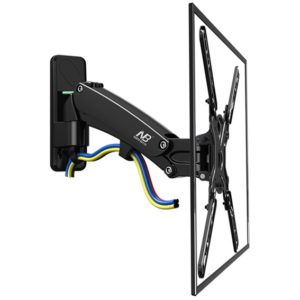 Watching television is one of the many luxury activities that human beings have undertaken since the early twentieth century. Millions if not billions of users around the world use televisions to catch up on the news, sports, their favorite TV series and movies among other television content. One of the main problems is the ergonomics behind watching television. Since a lot of people do not set up their television sets well, they end up developing complications related to the eyes, lower back and abdomen, mainly due to their sitting posture while watching or the glare. Ergonomic engineers have come up with solutions to these problems, most notably the TV mount, and specifically for this feature, the gas strut TV mount in Singapore.

The gas strut television mount is a device that is used to hold the television set in place on the wall in order to provide a suitable angle for viewing. The gas strut TV mount is designed to make sure that the consumer is able to watch television from any angle they wish as long as they adjust it to required position.  This is done by enabling the user to alter several aspects of the mount, i.e. lift, rotation and tilt.  By controlling these aspects of the gas strut TV mount you will be able to get a tv watching experience like no other.

Adjusting the tilt of the mount enables you to change the angle at which you want to watch the television, whether while sitting on your favorite couch, lying on the floor or even while standing. This will help reduce stress on your neck and upper back that is experienced due to normally placing the television parallel to the wall hence making it difficult to observe the television comfortably from a lot of angles. Gas strut wall mounts make this simpler and safer.

Rotational capabilities of the gas strut television mount make it convenient especially when you want to view the television from a certain position in the room. Be it your favorite corner, or favorite cornet from which you usually are not able to fully view the screen. The rotational capabilities of the gas strut television mount enable you to rotate it to a position suitable for your use. So you don’t have to worry about straining your neck trying to capture a moment o the television show.

The lift capabilities of a gas strut television mount enable you to view the television from a suitable height. This helps in preventing neck and back strains especially if you are a tall person. The gas strut holds the television in position at whatever height you wish to view your favorite show.