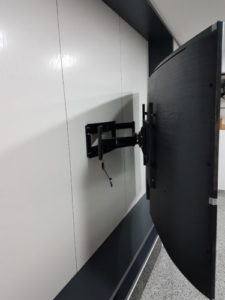 Watching TV has become a favourite pastime for a large percentage of the world’s population. With changes in size and shape of television, mounting the television has changed too. From the days when you would mount the television on a table to the modern television bracket show that there is advancement that has taken place. The full motion double arm television bracket comes in handy for those with big television screens and would like to experience full comfort while watching television in terms of viewing angle without having to worry about their television falling off the wall.

The full motion double arm television bracket is an accessory that allows you to mount your television on the wall and change its position depending on your preferences. It is designed to suit the user’s ergonomic needs for various situations and conditions. By changing the various aspects of the TV bracket, such as tilt angle, plane rotation and arm length, various configurations can be achieved in order to gain different experiences for different situations.

The full motion double arm TV bracket allows you to change its tilt angle so as to enable you to view it from various positions; while lying on the floor, while seated on the couch, or while standing. This prevents you from getting back aches and straining your neck while watching television or while gaming.  The ability to change tilt also allows a larger variety of viewers to be able to watch the screen properly without having to move the screen unnecessarily.

The full motion double arm bracket is robust and is capable of holding television screens of from 36.5kg(80ibs) to 90kg (200ibs). This ensures that your television is firmly fixed on the wall or stand and you can watch television without having to worry about your television falling off the wall.

The bracket also comes with an adjustable arm that allows you to change its distance from the wall. This is especially useful during cleaning and dusting of the television set. This may also come in handy if the wall is far away from your sofa hence making it easier to view you television from a wider range of distances around the room.

The full motion double arm TV bracket in Singapore would be a wonderful companion in spicing up your television watching experience.