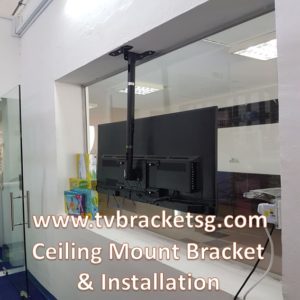 You have bought a nice, sleek and modern flat screen television and you want to use it for your home entertainment and after your research, you have found that there are various ways to sit your television. But no, the stands seems so traditional and so you decide to go for the mounts, as you do your research, you note that there are different types of Tv Brackets in Singapore, you are not a cheap person and therefore, you make a decision to go for something with extra class and elegance, and that’s when you notice the ceiling mounts.

In our previous articles, we’ve been talking about the different types of wall Tv Brackets in Singapore, the television mounts and they are unlike anything we’ve ever seen before. Some of the mounts are ‘hybrids’ of the traditional mounts and brackets and come packed with features that truly makes them stand out from the other Tv Brackets in Singapore. We have not talked about the ceiling mounts and in this article, we shall be explaining as well debunking some myths about the ceiling mounts.

What Are Ceiling Mounts

What I love about most of the mounts is that they are self-explanatory and just looking at the name itself, you will understand what we are talking about. Now in our case, the ceiling Tv Brackets in Singapore work in the same principle as all other mounts in that they hold the television in a fixed or moving position but now, on the ceiling.

They are an excellent alternative to the wall mounts and these are very special especially where the room is small or even having unusual designs. So, in essence, the ceiling mounts are just wall mounts but now dangling from the ceiling. A plate will attach to the ceiling, with a mounting arm that hangs down to hold the television.

If you have walked into a bar, restaurants, banks, you must have noticed the different ceiling brackets that beautifully show the screens in a way to serve everybody. And while our houses are becoming more and smaller, the televisions are getting bigger and therefore, we need a space to support them and what better way than the ceiling mounts?

There are four main types of the ceiling Tv Brackets in Singapore and most of them are motorized and that means that they can be remotely accessed.

Dual ceiling mount which just as the name suggests, it can hold two television sets. Basically, these ceiling mounts are designed to be used in restaurants and bars.

Rotating ceiling mounts which allow the users to rotate the television up to 360 degrees. Therefore, it will not matter where you are, you can be able to watch the television from anywhere in the room.

The folding type; which are very modern and discrete. When you want to watch your television, you can just unfold the mount and watch. When you are not using the television, you will just fold it away. These folds are very aesthetical and they come with a lot of flexibility and practicability.

Extendable ceiling folds which ensure that the height of the ceiling will not be an issue as they can extend, or simply, they allow you to alter the height. Good thing is that you can operate them manually or with a remote.

Having a ceiling Tv Bracket in Singapore is fairly simple and with today’s market, you will get almost anything and everything you want. However, before settling on the price, consider the size, the model and the price. Good models are pricier. Make sure that you are getting a television of high quality because you are installing the tv on a higher level which means the quality of resolution may be affected. Also, the quality of the mount counts a lot. Also, check to see the environment, for example, the room might be adequate not to put up a ceiling mount. In our next article, we shall look at how to install the ceiling mount.