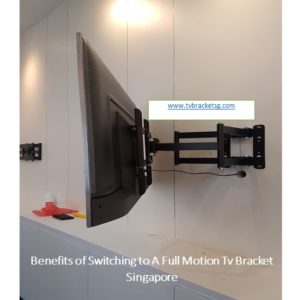 In a previous blog post, we covered in detail what the full motion television brackets are and their main distinctive features. This blog post is a continuation of the same where we are going to be talking more about the benefits of the full motion tv brackets Singapore. First of all, it is important to acknowledge that there are several tv wall mounts to consider and most people who have just bought a flat screen television will tend to go for the low-profile mounts, mostly because they lack understanding of the other types of brackets that exists. Some of the mounts that you will find in the market include, the tilting mounts, under the cabinet mounts, the ceiling mounts and finally the full-motion television brackets.

Flat Screen TVs Are Meant to Be Mounted

When it comes to installing your television one of the first question you must be asking yourself is whether to mount or not to mount but the fact is, the modern-day televisions are designed to be mounted onto a wall. Most of the flat screen television that you will find in the market today have a specific bracket that are designed to enable mounting on the wall which gives that viewer an optimal viewing angle. It is also important to highlight that the modern-day flat screen television is slimmer and lighter which means that mounting a television today is a lot safer.

It is also important to note that you don’t need to worry about the compatibility of your television with the TV wall mounts, single or even double as nowadays TVs are designed to be VESA compliant. As per your circumstances, just because a television is meant to be mounted doesn’t mean that you must mount it, it is possible to mount the television on a standing mount. Therefore, with that said, let us look at some of the compelling benefits why you should switch to a full motion television bracket.

The other benefit of the full motion tv bracket Singapore is that they are safe. One thing you will note is that nowadays, flat screen television, given their light and slim design, they are more susceptible to falling and tipping over, which means, having them unsecured poses a risk to children and to the pets around. Therefore, having the television mounted will give you the peace of mind by keeping the television out of reach of children and eliminating the dangers of it falling over.