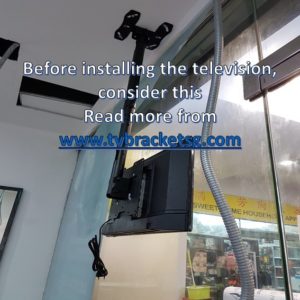 You finally did it. You have it with you but now, the only problem is, where are you going to place it. You are thinking of a television stand, but you were advised against it, reason being that they are not safe. Someone else suggested television mount because they are safe and much convenient for small rooms. However, what they failed to tell you is that it is a process and it would require to spend a lot more.

Busting the walls open and finding the studs is already a hectic work. Adding new electrical cables and outlets sounds like a lot of fun and a way to spend your weekend for an entire month if you decide to take on the mantle all by yourself. However, if you would like not to spend a lot of your time doing the same thing over and over again, you should hire a professional service. Because there is a high risk involved in installing the television all by yourself. You don’t need to spend your night worrying about your tv falling off. Before we even go to the installation process, do we even need it in the first place? Is it necessary to hang the television onto a wall? Even if it is, there are some things you need to familiarize yourself with.

Your choice of tv bracket

What are connecting the Tv to

After deciding on the choice of the tv bracket in Singapore to use, you should figure out all the devices that the television will be connected to. A Roku? A cable box? Blu-ray player or even a gaming console. It is very important to give all this information to the person who is going to install the television bracket in the house ahead of time so that he can make the necessary arrangement for cabling and storage options available to you.

Before you mount the tv onto a wall, make sure you have made the necessary arrangements where your devices will be stored. Are the consoles to be placed below the television or above it, or on floating shelves? This is an important consideration since it will allow you to leave out the space you need for these gadgets. The important thing is to know where all these items are going to stay since they have a direct impact on the installation process.

Location of the tv

This is another important consideration that you can not factor out. The location where your television is to be placed plays an integral role since it dictates your comfort while viewing the television. Do you like staring the television while watching, probably not which means for a better view and control of your viewership, you will have to get an articulating mount. Also, the nature of your walls will also dictate the location where you will mount your television. There’s not much you can do about this but whether you have dry walls, stone or bricks this will impact how and where you mount the television.

Like in most places fire codes will dictate that high voltage cords cannot go behind the walls which means that the installer will have to install another cable outlet on the wall which will cost you extra, it is something you might want to keep in mind before you begin the installation process. The other cables- the low voltage wires like HDMI cables can be always go behind the wall. There are cord management strips that you can use for concealing the cable works for your tv.