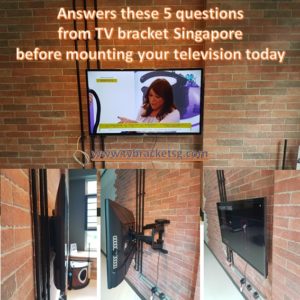 Superficially, mounting is a great option. Most people are preferring mounting to the traditional television set up and there is a very good reason for that. Here at Tv bracket Singapore, we have covered in great details the advantages of television mounting, check out our blog for more inspiration. Mounting the television to the walls is a good idea, it saves a lot of space, keeps the television very safe and lifts the television on a higher place where everyone can be able to view.

At least, that is all what we know, what most DIY people forgot to mention is that if you start the mounting process without a place, it could end up being chaotic. However, you can stop that from happening. Help the process of mounting by answering these 5 questions from tv bracket Singapore mounting manual.

What’s your plan for the cords?

With mounting, one of the obstacles that you will come across is the cable work and coming up with a solid solution on how to conceal them. Tv bracket Singapore advices that before mounting your television, you have or make a provision for the cable work. The sleek design of a mounted television can be easily destroyed by dangling ugly cords stretching up from the wall. Even if you are not going to use a single plug for the devices to be connected to the television, it would still leave an unsightly look for the television. The television cord itself from the socket could disrupt and defeat the whole purpose of mounting.

There are however a few solutions that TV bracket Singapore advices to make sure that you leave a clean look for your mounted television. One of the ways is to have tv bracket Singapore professionals install the cords inside the walls. The other solution to the cord problem is having the power outlet installed behind the television, this is a good solution since it would mean that the power cable doesn’t need to dangle. Hide the cords with a cord-hider which camouflages the wires.

And the walls, can they handle it?

Before mounting, our professionals have to assess the walls. I imagine if you are going to mount all by yourself, this is a consideration that you are taking seriously. The wall type in your house determines in a great length the future of your television. Whether or not your wall can support mounting is something that you need to take into consideration when mounting. What we find is that most people make the assumption that with the modern televisions, given their feather weight, they can easily be installed on any wall. The fact is, even with most modern, lightest televisions, they can be quite heavy to some of your presumed heavy framed pieces.

Tv bracket Singapore advices mounting on a stud where you suspect the walls to be weak and wont support the television as they ought. Do not attempt to anchor the television on a dry wall, it could be very dangerous. If your walls do not have any stud, find another location.

How far to the ports?

Are you really comfortable?

Tv bracket Singapore advises that in such a case, you have to choose an adjustable television mount that you can easily adjust or customize to suit your various viewing preferences.