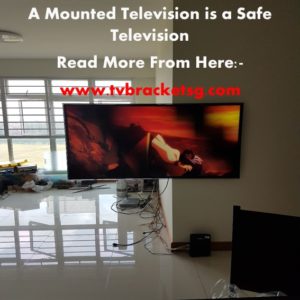 We have had so many cases where the television falls either from the stand or from the mount, we have covered an article that explains why televisions may fall from a mount. Being hit by a falling television never ends well, and while the flat panels are much lighter than the CRT tube models, the size of the flat panes keeps growing each and every day resulting in increased weight. It may not look or sound catastrophic but even a small flat panel is very dangerous. Imagine the amount of glass that is!

A falling television in wake can cause a range of accidents, including skull fractures, profuse bleeding, other fractures, nasal obstructions, among many other numerous accidents which can be severe enough to be fatal. However, with proper mounting, the accident rate is reduced to almost zero. People are currently obsessed with the flat screen televisions and this has caused problems with respect to safety and there are statistics to prove this. Most people make an assumption that placing the television on a stand will do the trick and it will be safe, after all, its light! You need to mount the television and make sure that it is firmly held on the wall.

Keep on checking the status of the mount

Most people will mount the television and leave it at that. They never check, and as long as the mount is serving its purpose, then everything is okay. Well, that’s a mistake you might regret later. You need to keep on checking the status of the mount to make sure that everything is working well. Every once in a while, you need to check on the different parts of the mount to make sure that they are moving on well. Yes, most of the material you read on the internet will tell you that the mounts are the safest way to secure your television but, they are just a piece of metal, safety begins with you! You have to occasionally check on the mounts to make sure that everything is working perfectly.

Get the best quality

Do not compromise on quality to save a few bucks! People will go for a mount that is cheap as long as it holds the television. That is a mistake that you might live to regret later on. When shopping for the television brackets, make sure that you get the best quality because only the best quality will guarantee your safety for you and for your television. The best manufacturers will give you a guarantee for their Tv Brackets in Singapore. Otherwise, purchasing a mount that is not genuine will cost you your money for the television, the bracket, and installation service.

If you are not sure, get professionals

One thing I advise our customers for the Tv Brackets in Singapore is that they do not initiate the mounting process unless they are completely sure of what they are doing. If you are new to the mounting process, you should first consult with the professionals to go about it. the internet will tell you that the process is fairly easy, and indeed it is, but if you have never done it before, be sure to get a challenge. We are always available to help you with the mounting process and once you buy your mount from us, we do a follow up to make sure that you have successfully mounted the television. In addition, our professionals are always here to help you with the process.

A mounted television is a safe television, however, to ensure the safety, there are precautions that you have to make sure are well taken care of. Mounts compared to stands are the best and will keep your television safe for as long you have the right quality, check on the status of the mount and mount it properly on the walls.